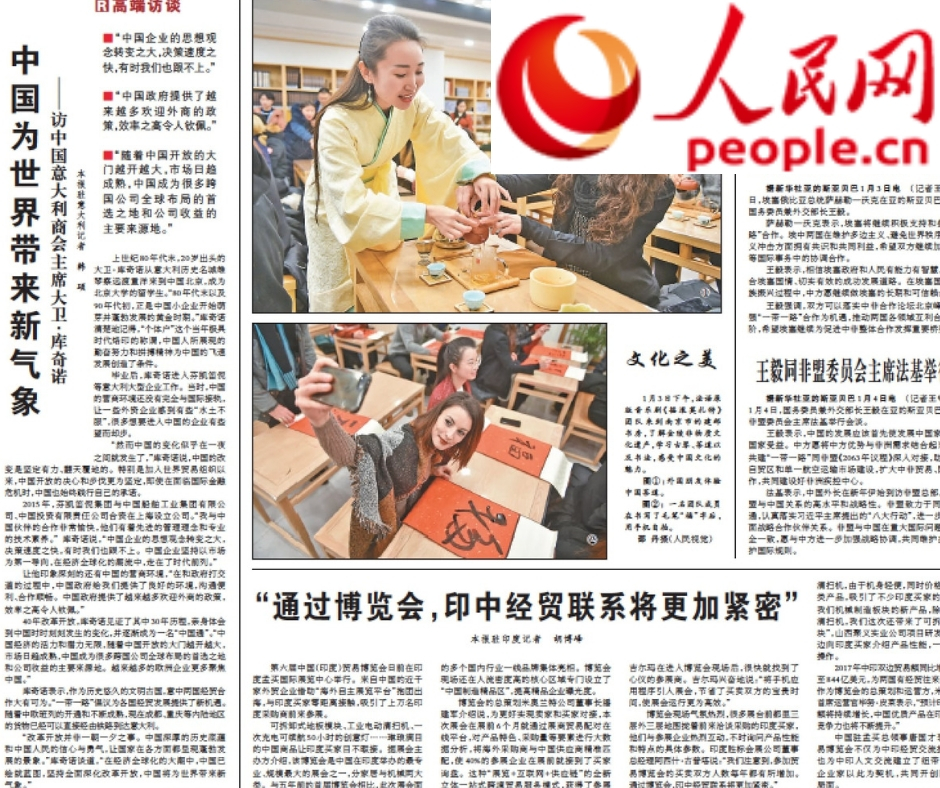 we are glad to share with you the translation of the interview of CICC's Chairman Davide Cucino for the newspaper People's Daily.

Interview with Davide Cucino, Chairman of China-Italy Chamber of Commerce

Our Correspondent in Italy, Han Shuo.

■ “Chinese enterprises are changing their ideas so dramatically and making decisions so fast that sometimes we can't keep pace with them.”

■ “The Chinese government has provided an increasing number of policies to welcome foreign investors with admirable efficiency.”

■ “With China's opening up, the market is becoming more and more mature, and China has become the first choice for many multinational companies to go global and the main source of their income.”

In the late 1980s, Davide Cucino, in his early 20s, came to Beijing from Vicenza, a famous historical Italian city, to study at Peking University. "The late 1980s and early 1990s were the first time when China's small businesses began to emerge and flourish" as Mr. Cucino clearly remembers. "Self-employed businessman", a title with a strong mark of the times presents the diligence and fighting spirit of the Chinese people, which created conditions for China's rapid development.

After graduation, Mr. Cucino worked for large Italian companies like Fincantieri. At that time, China's business environment was not fully in line with the international standards, making some foreign-funded enterprises feel "not acclimatized" and discouraging many enterprises that wanted to enter China.

"However, it seemed that China had changed overnight," said Mr. Cucino. China's change was firm and significant. Especially, since its entry into the WTO, China has been more determined to open up. Even in face of the international financial crisis, China has always honored its commitments.

In 2015, Fincantieri Group established a joint venture company in Shanghai by cooperating with China State Shipbuilding Corporation Limited and China Investment Corporation. "I have enjoyed working with my Chinese partners, who have advanced management ideas and professional technology literacy," said Mr. Cucino, "Chinese enterprises are changing their ideas so dramatically and making decisions so fast that sometimes we can't keep pace with them. Chinese enterprises adhere to the market orientation and are ahead of the times in the economic globalization."

The reform and opening up policy has been implemented for 40 years, and Mr. Cucino has witnessed its 3/4. He has experienced changes in China at every moment and gradually became "an old China hand". "China's economy is full of limitless vitality and potential. With China's opening up, the market is becoming more and more mature, and China has become the first choice for many multinational companies to go global and the main source of their income." said Mr. Cucino.

Mr. Cucino said that since China is a country with a long history and an ancient civilization, the economic and trade cooperation between Italy and China is promising. The "Belt and Road" Initiative has provided new opportunities for the economic and trade development of all countries. With the opening and maturing of China Railway Express, goods from inland areas such as Chengdu and Chongqing can now reach Italy directly by rail.

"Reform and opening up didn't happen overnight. China's profound history and the confidence and courage of the Chinese people have enabled the country to flourish in all aspects", said Mr. Cucino, "In the economic globalization, China has drawn a blueprint for deepening reform and opening up in an all-round way. China will breathes new life into the world."